Little Steven’s Underground Garage on SiriusXM Channel 21 will celebrate this year’s relaunch of legendary label Cleveland International Records with “Cleveland Rocks: A Tribute to Steve Popovich,” an hour-long tribute dedicated to the life and musical legacy of the label’s late founder. 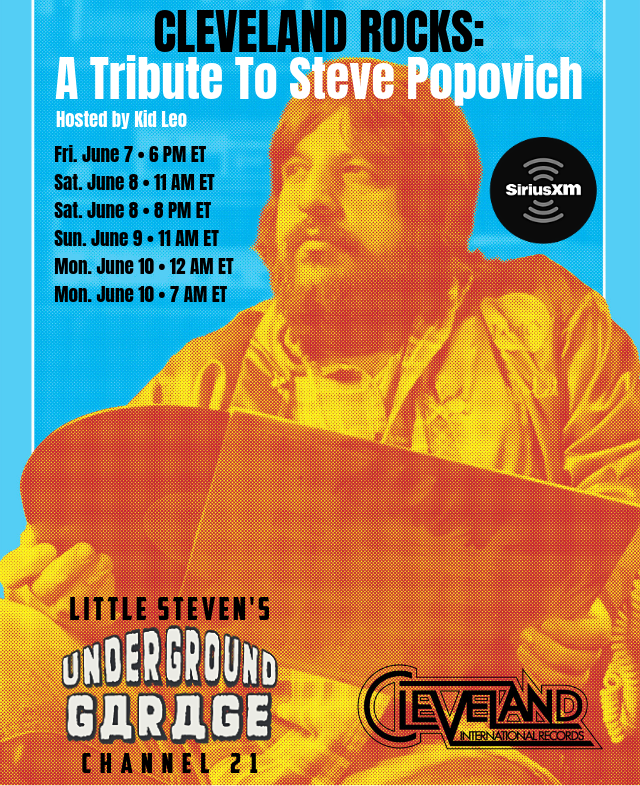 The third incarnation of the label that gave us everyone from Meat Loaf, Ronnie Spector & The E Street Band and Southside Johnny and the Asbury Jukes to America’s polka king Frank Yankovic is being guided by Steve Popovich, Jr, son of Steve Popovich and a veteran radio and music industry executive. “It’s great that Steven and those who work on his channel are recognizing the value of what my dad meant and still means to the music business,” Popovich, Jr. says. “It’s especially gratifying that Kid Leo is hosting because he was supportive of the label since its launch in 1977.”

In April, Cleveland International Records re-released its mid-90’s all-star compilation Cleveland Rocks, which is available on Amazon and many other outlets. In addition to Meat Loaf’s “Paradise by the Dashboard Light,” the 13 track collection includes label classics by Ian Hunter of Mott the Hoople (the anthem “Cleveland Rocks”), Ronnie Spector & the E Street Band (“Say Goodbye to Hollywood”), Southside Johnny & the Asbury Jukes (“I Don’t Wanna Go Home”), Just Us Girls (“Time Warp”), Iron City Houserockers (“Have a Good Time But Get Out Alive”), Euclid Beach Band (“There’s No Surf in Cleveland”), The Boyzz (“Too Wild to Tame”), Essence (“Sweet Fools”), Mike Berry (“I Am a Rocker”), The Rovers (“Wasn’t That a Party”) and Bat out of Hell collaborators Jim Steinman (“Rock and Roll Dreams Come Through”) and Ellen Foley (“We Belong to the Night”).

“I love the rock and country albums, but I’m especially excited to introduce a whole new generation to all of this amazing polka music that my dad loved and cultivated so passionately,” Popovich Jr. says. “It’s important for Cleveland International to continue its pursuit of this genre. We live in a time when the world could use more polka music. I grew up listening to it and you simply can’t be in a bad mood, as my dad would say, ‘Throw out the Prozac, here come the polka heroes!’”